I now know why there is a sign in the NEADS client house that says, “Every once in a while a dog enters your life and changes everything.” Little did I know just how quickly everything would change for the better when Sammie entered my life.

After the first week of training at NEADS, Sammie and I went home together for the weekend. On the way, we stopped at the grocery store, the type of store I typically dreaded going to. It is always crowded and hectic and not a great place for someone who is always on the lookout for danger. Before Sammie, I looked for excuses to not go, or, if I did go, I made sure I was within arm’s length of my husband. But this time, it was just me and Sammie. With a confident Sammie by my side, I was able to go in, get the items I needed, and get out without a meltdown. That was when I knew there was something special going on.

Now when I feel like things are starting to spin out of control, all I have to do is look down at Sammie, with his trusting, calm expression and realize, “If he’s not concerned, then why should I be?”

MY JOURNEY TO NEADS. I spent over 11 years as an Air Force Active Duty Logistics Readiness Officer, joining in my mid 30s and deploying three times. My first deployment went as well as could be expected. My second deployment was supposed to be a relatively benign tour, but it got bad, really bad. Thankfully I made it out. And even though I was happy to be home, I was finding it hard to regain a sense of safety and security.

The Air Force typically do not deploy as a unit, but rather as individuals or small teams. So often when you get to your deployed location you don’t know anyone there, and when you get home nobody else has gone through the same experiences you have. That can leave you feeling very alone.

People have different ways of coping with stress and trauma. Mine? Extreme and endurance sports. They helped in several ways. I would be so physically exhausted that I could finally sleep. It was also easy to isolate myself from others. Not many people are willing to go for a “little” 18-mile run with you or spend the weekend backpacking in the dead of winter. Since fitness is applauded in the military culture, nobody realized I was doing this to escape, to run the ugly out of my head, while at the same time run towards a feeling of safety that always seemed just out of reach.

I was grateful for my third deployment, my reasoning being that at least “over there” I sort of knew who the bad guys were, whereas at home, it could be the person sitting next to me, and I would not know until it was too late. Part of my job was to move casualties back to the US – an experience which, over time, started bringing back the bad memories of my second deployment. When I returned home, I was on edge, not sleeping, and isolating myself. Again, I turned to hiking and running and climbing to cope. But a severe knee injury suddenly took my coping mechanism away, leaving me without the physical activities that I was using to give my brain some relief. On top of this, I knew the career I loved so much was ending, and so a downward spiral sped up.

By chance I happened upon a flier for NEADS at one of my many VA appointments. It was specifically directed towards female veterans. I had met a Weekend Puppy Raiser several years ago, and knew of NEADS. After much thought, I contacted them, completed the application, had my interview, and hoped for the best. Then I received the call that I was accepted into the program. I’m honored to be NEADS first female veteran TAD client and am so grateful for this experience.

I sing “You are my Sunshine” to Sammie every morning, and with a stuffed toy in his face he wiggles so much he can’t walk straight. How can you not be happy waking up to that? In the evenings he is excited to get home, and after a little exercise he relaxes. I climb into the bean bag chair and he lies on top of me, his weight on me so comforting. He exhales in a way that makes him seem like he is completely deflating… This reminds me to do the same, and soon our breathing – and his snoring – is in sync, relaxing me with each breath. 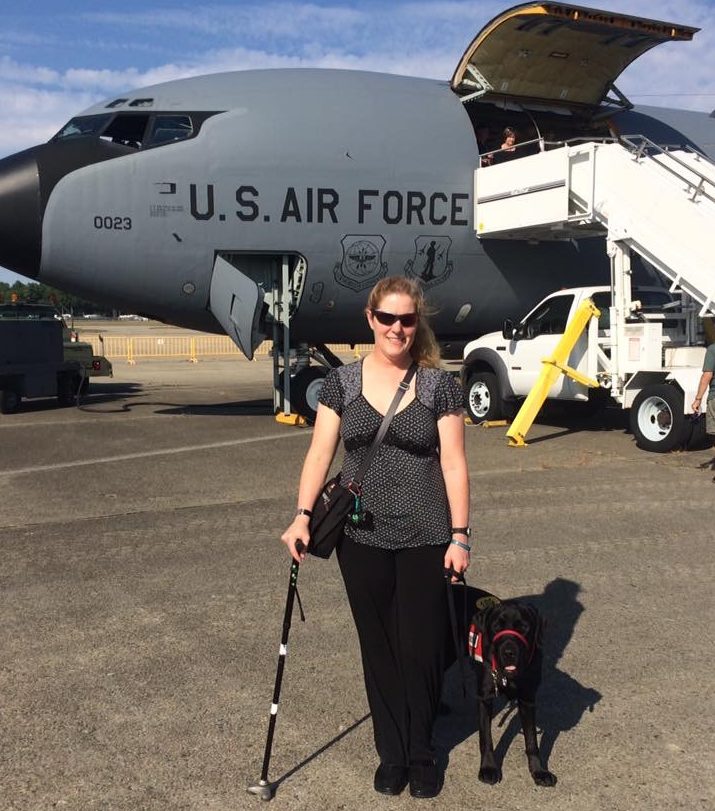