I’ve been a Weekend Puppy Raiser since October 2018. Reilly is my second pup. He came home for his first weekend on August 2nd. Sully, my first pup, was 9 months old when he came home. He was matched in July as a Trauma Assistance Dog.

My Greyhound/Coonhound Gus passed in May 2018. In the ten days after Gus passed four things happened that led me directly to becoming a Weekend Puppy Raiser with NEADS. I went to orientation and left with the Puppy Raiser manual. As was said to me when Sully came home, it was a match made in heaven. That continues to be true as Reilly and I take our first steps together.

It’s difficult to choose one thing. I love going to class – the joy of being with and learning from the pups, other puppy raisers, our PPA’s. Between the time when I went to orientation and Sully came home I went to classes. It was wonderful. The support from and friendship with other puppy raisers, who so generously share their experience and enthusiasm, is beyond words. I also love being with my pup on field trips and talking about NEADS, the Prison Pup Program and the way in which Service Dogs change lives. I love the joy of people getting to see a Service Dog in Training at work.

I have many favorite memories. With Sully – his signature way of lying as “froggy;” playing soccer by himself, then putting his front feet on the ball and pulling down to make it bounce up for him to catch; his joyous Say Hello’s, especially with children with special needs. With Reilly – the way he pounces on a toy; the way he sits and looks at me with tilted head and eyes bright; his first (awesome) field trip. Last but not least, the puppy raisers who arranged to be with Sully and me when I dropped him off at JJ Moran our last weekend together, to take photographs and celebrate. Because of them it was a truly joyous experience. 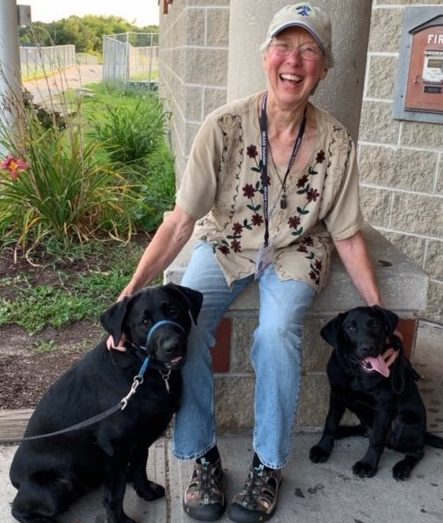