You may have met one of NEADS’ Service Dog Ambassadors. If you have, you’ve seen a highly trained World Class Service Dog in action, calm, confident, and impressing the heck out of their audience with specialized task work. We love and honor our five Service Dog Ambassadors and are so grateful that they’ve shared and continue to share NEADS’ mission with so many.

NEADS’ very first Service Dog Ambassador was Rainbow. She set a high standard for her successors. She also holds the distinction of being the first Service Dog to be placed with a combat veteran. Rainbow retired when her partner was no longer in a position to care for her. John Moon, then NEADS’ Manager of Communications, Programs & Community Engagement, adopted her, and she became part of his community outreach.

“Rainy and I made an excellent team, because we could demonstrate physically and visually what Service Dog task work entailed, from helping their partner find a TV remote across the room, to retrieving a bottle of water from the fridge, or even picking up something as thin and small as a quarter or credit card,” explains John. “Rainy could locate and retrieve these objects, and this made the entire experience ‘real’ to her audience.”

Rainbow made a major, lasting impact at NEADS, says John. “Rainy and I were able to reach thousands of potential clients and donors during our engagements with schools, businesses, veterans programs, State House and hospital visits, corporate presentations, and much more.”

Ten years ago, Currahee went into early retirement from his Service Dog partnership with a veteran client. He joined the Development team as Service Dog Ambassador and worked with Director of Development Cathy Zemaitis. “He was crackerjack,” says Cathy, “so well trained and he loved to work.” He became a valued partner, helping Cathy share NEADS' mission. She says, “the early success of the Development department was thanks in large part to Currahee.” Cathy remembers that after the Boston Marathon bombing, NEADS got a phone call from Boston Medical Center, saying they were treating a bombing survivor who could benefit from a Service Dog. After a visit from Currahee, Jessica Kensky was convinced: she needed a Service Dog of her own. She still calls Currahee her “first love.” Jessica was eventually matched with Rescue, and the two have become unofficial ambassadors themselves. Jessica and her husband, Patrick Downes, even wrote a best-selling children’s book about how Rescue helped her heal and move forward,  Jessica and Rescue: A Life-Changing Friendship.

Many of our dogs have very special names, and Currahee’s is especially noteworthy. A Cherokee word meaning “stand alone together,” Currahee was the nickname for the 506th Infantry Regiment of legendary parachuters who helped turn the tide in World War II. Cathy says he honored the name with pride.

Currahee retired at the age of seven after an eye disease prevented him from working. A grand old man now, he mentors Cathy’s two other Service Dog Ambassadors, Loring and Verna. (Yes, Cathy’s is a Lab-filled house full of dog hair and joy.)

Loring, Service Dog Ambassador from 2016 to the present.

Loring is adept at making friends and influencing people. As an Ambassador, she frequently makes trips to the MA State House on Beacon Hill (she’s captured the heart of many a legislator), schools, corporate partners, and many more. When the Worcester Red Sox—a longtime partner of NEADS—were forced by Covid to limit attendance to 25% of capacity in their newly built ball park, a life-sized cut-out of Loring (along with several other NEADS dogs) helped to fill the seats. After the season, cardboard Loring went with Representative Kimberly Ferguson to reside in her office at the State House. On occasion, Loring can be found elsewhere in the building, which leads Rep. Ferguson to ask, “Where’s Loring?”

NEADS was also served by Sally, who worked closely with Kevin Lambert after her release from the program due to hip dysplasia. A veteran himself, Kevin worked closely with NEADS clients as Program Development Administrator and was especially dedicated to our veteran clients. Sally helped him demonstrate just how effective a Service Dog could be.

Sally had a unique ability to connect with everyone she met, Kevin says. He remembers her meeting a child with intellectual disabilities who was afraid of dogs. Sally lay down on the ground with him for a long time, gently encouraging him to pet her. “She was so engaged and intuitive, and made incredible eye contact. She knew when to be gentle and when to be energetic.” She played a key role when Kevin interviewed potential clients, calming and encouraging them.

“Sally was always a sweet girl, loved to work, eager to learn, incredibly tactile, with a playful, yet even temperament and superior confidence,” recalls trainer Magen Blake. When her medical results unfortunately disqualified her from our program, “we decided she was just too good to let go. It was only fitting that her expertise and confidence be continued on in ambassador form with Kevin. What a lovely pair!” Sally and Kevin retired from NEADS in 2021.

Verna, Service Dog Ambassador from 2022 to the present.

Now nearing retirement, Loring has recently been joined by Service Dog Ambassador Verna. Like Loring, Verna was unable to be placed with a client for medical reasons. Cathy says she’s beautifully trained and loves her work. “She’s painfully perfect,” according to her proud handler. She’s already taking the world by storm, appearing on WCVB-TV Channel 5 in her very first outing as an Ambassador.

Cathy agrees with John that there’s no more effective way to explain what a Service Dog can do than by showing a dog in action. “There’s a lot of confusion about Service Dogs,” Cathy points out. “When you can show their task work and their unflappable demeanor, people understand just how extraordinary these highly trained working dogs are.” She loves to have Loring and Verna demonstrate how a Service Dog can, among other things, bark to alert a neighbor to a partner in need or stand and brace to help them get up after a fall, fetch medicine from the refrigerator, or retrieve a misplaced cell phone or keys. These are just a few of the 50 to 60 tasks and commands that all NEADS Service Dogs are trained to execute.

“They work hard, but they are real dogs,” she says. “They play and do all the things that any dog does.” All three are with her every day at NEADS.

Thank you, Rainbow, Currahee, Loring, Sally, and Verna, for your extraordinary work helping NEADS spread the word about the important work that we do. And thanks to all the amazing dogs that go out and help us fulfill our mission to change lives, each and every day. 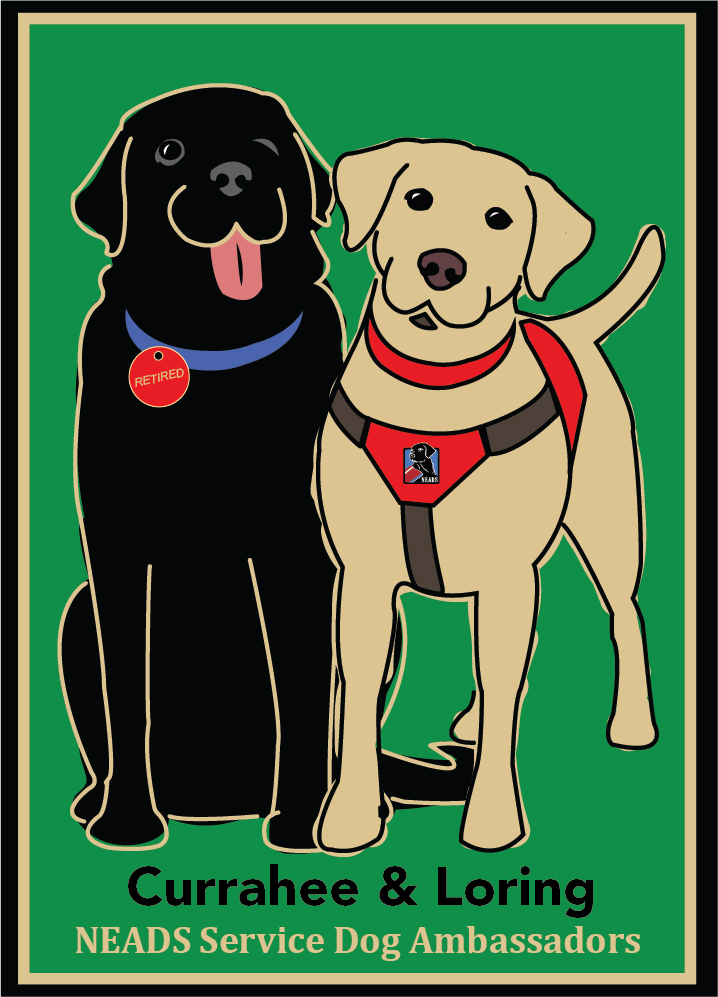