I have always been a dog person.

When I was injured in 2011, I briefly entertained the idea of having a dog, but felt I needed to take care of myself more and didn’t want to put extra responsibility on the caregivers who help me. You see, after my spinal cord injury, my life became a constant battle between different therapies, doctors’ appointments, home exercise, and just getting my life back to some normalcy. This took me a little over a year, but even then, I didn’t feel as though I could comfortably take care of a dog. Now that I have Oliver, I somewhat regret not getting a dog sooner.… but then, if I had gotten a dog sooner, it wouldn’t have been Oliver.

FIRST STEPS. It wasn’t until 2015 that I felt I was ready take care of someone other than myself and began to see that a Service Dog might be good for me and my independence. I have a couple of friends with Service Dogs who reassured me that it was a great idea, so I applied for a Service Dog with NEADS. The process starts with an extremely detailed application so NEADS can learn as much as they can about you. If they think you’re a good candidate for a Service Dog, you then have a lengthy, in-person interview at NEADS in Princeton, MA. If your interview goes well, they tell you they’ll contact you when they have a dog who has completed training and is a good match for you. This could take anywhere from several months to over a year. It was hard to wait, but it is worth it!

The day did come when I was contacted by NEADS to let me know that they had a dog that would suit my needs. He was tall enough to reach his head to my lap in order to give items he fetched, he didn’t need any new or special commands in order to serve me, and he had the right personality traits to suit my lifestyle.

Next step: two weeks of training at NEADS.

TRAINING. Trainees stay in a beautiful, brand-new, specially built house accessible for any and all disabilities. I stayed in a room that had a hospital style bed, plenty of space for my wheelchair, and a room attached to mine for easy access to my caregivers.

On Monday, we were introduced to the trainers, and we went over some basics of being a Service Dog handler. I and the three other members of my training class were chomping at the bit to meet our new companions, but we had to wait until the afternoon. The suspense was killing us!

The day we met our pups was a very special day. The trainers brought all four dogs into the room, and it seemed as though the dogs knew who their handlers were. Oliver walked right over to me, like he knew me. It was breathtaking. From then on, it was six hours a day of learning commands, grooming tips, and the theories behind training; going out to public places; and some amazing extracurricular playtime.

Most NEADS dogs go through the Prison PUP Program, where they are trained by inmates at various prisons in MA and RI. I had the chance to meet the guys who trained Oliver at the Massachusetts Correctional Institute in Concord. After going through the security checks, we met in a common room with 15 or 20 inmates and correctional officers, all who were part of the program. I think the two inmates who were the primary trainers for Oliver were as nervous as I was, but you could really tell how much love they had for the program, the process, and the dogs. It was gratifying for them to see that Oliver was going to a good home with a person who really needed him.

I brought Oliver home the first weekend. This was a good trial run to make sure that I was comfortable with Oliver and his commands. The second week at NEADS was more training, and also education on the background of the dogs, canine health, and public access. Everything went smoothly, and at the end of the week we had the Assistance Dogs International (ADI) certification test. This is a series of commands that you need to do in a public place, and Oliver and I passed flawlessly… We were an official team!

FIRST YEAR. NEADS recognizes its newest teams at a big graduation twice a year. It is an amazing production, and I suggest you go to one or two. Not only will you get to see a bunch of awesome pups, but you’ll also learn a lot about NEADS and who they help.

NEADS has certain requirements for its Service Dog teams. For one year, I took Oliver to the vet once a month to have him weighed and checked out, as NEADS wants your dog to be healthy for as many years as possible. The dogs are to be treated as athletes, so you need to stick to very strict weight limits, exercise regimens, and really stay on top of any issues that they may have. You are also responsible to take an ADI recertification test after 1 year and then every 5 years after that.

WHAT DOES OLIVER DO FOR ME? As a quadriplegic, my dexterity and hand function are lacking, so I typically drop things quite a bit, and Oliver’s “Fetch” command gets used a ton. I have difficulties getting things that are in hard-to-reach places like countertops and tables, so his “Up” (front paws up) and “Fetch” come in handy. He flicks light switches and presses handicap door buttons for me all the time with the “Nudge” or “Paws” commands, depending on the situation. I have ropes tied to door handles in my apartment which he pulls on to open the door for me when I tell him to “Tug” and “Nudge” to close the door if needed. He can open a fridge door and grab something for me. He also has a way of knowing if I’m sad or angry or frustrated, and always cheers me up with attention and kisses, and, of course, his signature “I love you” look.

OLIVER OFF DUTY. One thing people ask me is if Service Dogs are always on duty. And technically the answer is yes, but you still need to exercise the dogs and give them free time. Once I take Oliver’s vest off for free time, he acts just like any other dog. You should see him when he gets the zoomies… he goes nuts! And he cuddles and wants love just like a regular dog, too. But even when Ollie is off the clock, I go through commands here and there, because although he is playing, he may need to stop and assist me.

It’s been two years… and I’m so happy I chose to get a Service Dog. Oliver enriches my life every day with the work he does for me and his unconditional love. When I’m down, he brings me up, and most of all we depend on each other. It’s a partnership/friendship that is hard to find elsewhere. I encourage anyone who could benefit from having a Service Dog to apply, but make sure you are ready, because it’s a responsibility that needs to be taken seriously. Though, it’s the best responsibility that I’ve ever had.

Many thanks to Ryan DeRoche for sharing his story. This post has been adapted from Ryan’s original post, Answering the FAQ About My Service Dog. 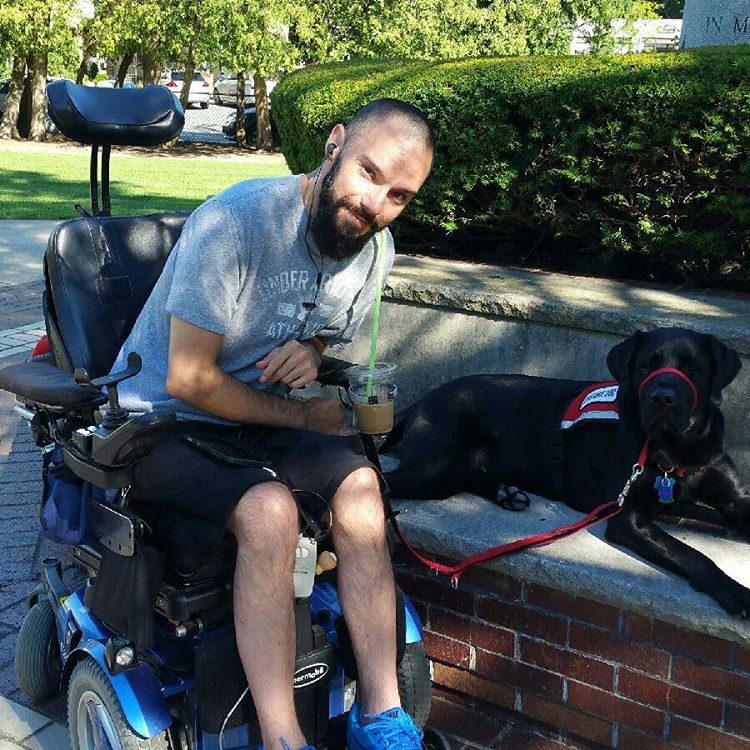